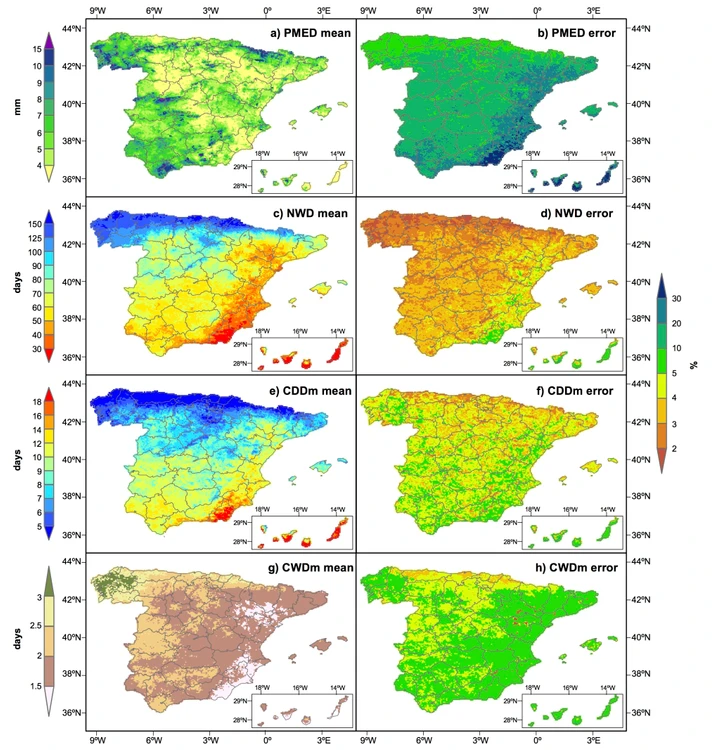 A high-resolution daily gridded precipitation dataset was built from raw data of 12,858 observatories covering a 10period from 1950 to 2012 in peninsular Spain and 1971 to 2012 in Balearic and Canary Islands. The original data were quality controlled and gaps were filled on each day and location independently. Using the serially-complete dataset, a grid with a 5×5 kilometres spatial resolution was constructed by estimating daily precipitation amounts and their corresponding uncertainty at each grid node. Daily precipitation estimations were compared to original observations to assess the quality of the gridded dataset. Four daily precipitation indices were computed to characterize the spatial distribution of daily 15precipitation and nine extreme precipitation indices were used to describe the frequency and intensity of extreme precipitation events. The use of the total available data in Spain, the independent estimation of precipitation for each day and the high spatial resolution of the grid allowed for a precise spatial and temporal assessment of daily precipitation that aredifficult to achieve when using other methods, pre-selected long-term stations or global gridded datasets.SPREAD dataset is publicly available at http://dx.doi.org/10.20350/digitalCSIC/7393.